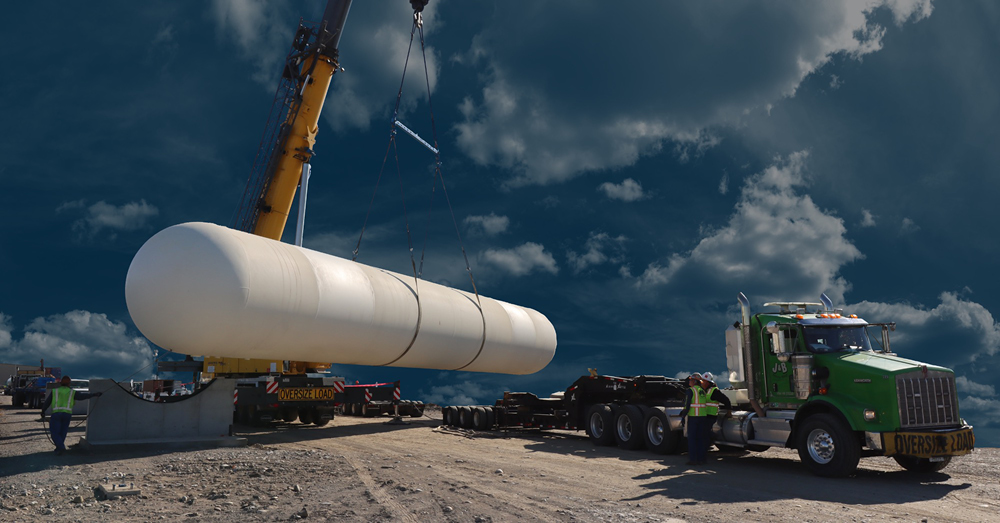 Christensen Inc. is installing a modern propane terminal at the Port of Pasco to support the growing demand for fuel for agricultural drying operations.

Christensen will add two 60,000-gallon double-walled tanks and a tower at its trans-loading facility east of Big Pasco Industrial Park.

The first tank and tower will be in place by September, in time for the busy harvest.

The company is negotiating a long-term lease with the port, which will fence the project to follow federal energy security regulations.

Christensen, based in Richland, is a regional energy company that sells gas, diesel, lubricants, and propane across Washington and Portland.

The propane business receives gas produced in Canada, Texas and the Bakken region and shipped to the Mid-Columbia by rail. In Pasco, trains offload their cargo directly onto trucks, which deliver it to customers.

Agriculture is the primary customer for propane, but Christensen sells to residential customers as well.

The tank project will double the speed of pumping and supply storage, which will cut bottlenecks that occur when trains are unloaded. Christensen will retire the inefficient equipment that moves propane from train to truck. The industry term is “transloading.”

Instead, trucks will be able to drive onto the property, tap the tower and drive off on their rounds. The company has its own truck fleet. It also delivers on behalf of competitors who pay a throughput fee for the service.

Christensen will consolidate storage in Pasco, though it will keep satellite storage in Yakima and elsewhere in its network, she said. “It’s helpful to have satellite tanks further from primary storage.”

Three are several factors behind the increasing demand for propane.

Orchards that once heated with diesel-powered smudge pots transitioned to propane to run wind machines. Cold nights in March and April led to a spike in demand as fruit growers turn on heaters.

Hemp, the industrial version of cannabis, is a growing industry in the region. Hops is growing in popularity too as small breweries ramp up. “Those are some of the reasons we’re seeing more need,” Ballard said.

As of early May, the coronavirus pandemic had not affected Christensen or the project, Ballard said. Work will begin in August.

Washington state consumed 160 million gallons of propane in 2015, the most recent figures available from the National Propane Gas Association. Nearly 22 million were used in agriculture, the industry association said in a study on the impact of propane on state and national economies.

Randy Powell established the company as R.E. Powell Distributing in 1935. The Christensen family took over in 1980 and expanded through a series of partnerships and acquisitions. It shortened its name to Christensen in 2017.

It is a distributor for most brand-name fuel companies, including 76, Chevron, Conoco, Exxon, Mobil, Shell and Texaco.

Founded in 1935, Christensen is family-owned and operated. Headquartered in Richland, Washington, the company employs more than 500 people across the Pacific Northwest and nationwide. Built on decades of industry experience and the latest technology, Christensen is revolutionizing the way fuels, lubricants, and propane are ordered, delivered, and managed. For the past 10 years, the Christensen Company has grown 8x faster than the industry average and has emerged as a market leader.